The yellow tin whistle – will it become the new symbol of the resistance against deportations? At the end of May Sudanese refugees demonstrated in an impressive way in Osnabrück how deportations can be stopped through self-organization: “…the residents warned each other with tin whistles of the impending deportation. Within the shortest time circa 150 people were up and about. They gathered in front of the houses to protest collectively, resolutely, and loudly but peacefully, against the police having forced its way in and against the impending deportation. They also sang in Arabic and in English and demanded the police to leave the premises. The officials seemed to be taken by surprise by it and one of them pulled his service weapon, while the policemen returned to their cars. The police cars then left the premises of the shelter in the direction of the access road and waited for reinforcements. Meanwhile the protestors closed the gate. After some time the police and the people of the aliens’ registration office left empty-handed..” (http://nolageros.blogsport.eu/2017/06/03/pm-sammelabschiebung-aus-dem-lager-ickerweg-erfolgreich-verhindert/).

Also in Erfurt new collective forms of protest were developed and, like we put it in the last newsletter, in many places the struggles for the right to stay are ongoing and their successes are also reflected in the official statistics. According to a recent parliamentary interpellation only 7% of the Dublin deportations could be effected in the first quarter of 2017. The expulsion authorities can hardly keep pace logistically with the transfer deadlines, the frequent collective as well as individual resistance very effectively blocks the racist exclusion machinery. Starting from these struggles against deportations, local ‘Solidarity City’ initiatives have meanwhile been created in a number of cities. A network meeting on this subject took place in Kassel at the end of June in the context of the action week on the occasion of 20 years no-one is illegal. And it were the above-mentioned and further activists from Osnabrück, who presented the ‘Solidarity City’ initiatives and in doing so underlined the pivotal significance of the connections with migrant communities. As elaborated in the calendar below, the exchange about such experiences and the further cooperation will be continued in the context of a ‘Welcome United Conference’ on 15./16.7. in Berlin. Immediately after the weekend of the, hopefully massive, protests against the G20 summit in Hamburg, we will in the first place focus on day-to-day anti-racist struggles and in the second place on the joint mobilization in September highlighted by the great parade on 16.9. in Berlin. In Rhein-Main a convoy of busses is already being planned for this event and we hope that refugees and migrants from many other cities will gather in the capital. With motivation vehicles we will emphasize the demands for freedom of movement and for equal rights: from huge yellow tin whistles against deportations, up to an original dinghy from the central Mediterranean for the struggle for ‘Save Passages’. 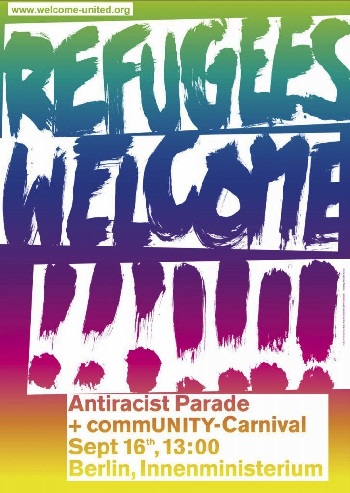 In the last June weekend alone, more than 13,000 people boarded boats from Libya in the direction of Italy and once again it was in the first place thanks to the permanent dedication of the civil rescue organizations that a further mass extinction incident did not occur in the central Mediterranean. Against the slander and criminalization attempts initiated by Frontex, the ‘humanitarian fleet’ so far stands its ground. And ‘Moonbird’, the small aircraft of Sea Watch and the Humanitarian Pilots Initiative, contributed in a very commanding way to the coordination of the rescue operations. Also at and for the external borders we say: We`ll Come United!

P.S.: The next Kompass newsletter will be published at the end of August and thus wishes to contribute again, shortly before the beginning of the transnational action days on 2.9., to the mobilization for We`ll Come United.