On 12.4.2017, initiated by civil society, a light aircraft took off over the central Mediterranean, over the world’s most deadly border. Against the mass dying at sea. The supporters are in agreement: ‘Safe passage. Now!’ The dying of thousands could be stopped tomorrow, if people could use a plane or a ferry to come to Europe. This is an entirely political decision that those responsible in the EU and its member states refuse to make. The sea is used as a deadly moat. No technology or military operation is considered too expensive for this. Neither are refoulements and confinements in camps in North Africa. No deal is considered too dirty. With boats and a plane we are taking a stand against the normalisation of death and suffering, whenever necessary, throughout the entire summer in order to see and to? rescue. In a zone with no rights. For a Europe of welcome.

These sentences briefly and concisely make the point of why Sea Watch and the Humanitarian Pilots Initiative (HPI), with the support of other organisations, started a civil air reconnaissance mission at Europe’s deadliest maritime border. “On Easter Sunday more than 100 refugees on a sinking dinghy could be rescued at the last moment, after having been discovered by a reconnaissance air plane far away from any rescue vessel .…” In the very first days of its deployment the ‘Moonbird’ – which is the name of the light aircraft – fulfilled its promise “to see and to rescue”!

Over the Easter weekend of 2017 one of the largest sea rescue operations in the central Mediterranean of the last few years took place: within three days at least 8,360 people were rescued at sea. Under the heading ‘A deadly rescue vacuum’ the project WatchTheMed Alarm Phone documented “how Europe uses death in the Mediterranean as a deterrent and simultaneously criminalizes civil sea rescue forces”, see https://alarmphone.org/de/2017/04/21/ein-todliches-rettungsvakuum/

The brutality and cynicism can hardly be outdone: The EU officials and EU member states are responsible for barring all the legal ways for refugees to get to Europe, thus forcing them to take the lethal route across the Mediterranean. Then they deliberately reduce the number of rescue vessels in the hope that the masses dying in the Mediterranean will serve as a deterrent. It is only thanks to the tireless dedication of numerous sea rescue NGOs and activists, that at Easter many hundreds of people did not drown again. “Yet despite their numerous life-saving operations several NGOs and activists have in recent months become victim of a despicable defamation campaign. Frontex, as well as several EU politicians and Italian public prosecutors, not only accused them of cooperating with Libyan traffickers and being involved in criminal activities, but also said that they themselves were making the crossings of the Mediterranean even more dangerous and deadly. These outrageous and cynical accusations follow the absurd logic that the death of refugees at high sea could have a deterring effect on other refugees and could thus prevent future crossings. In this way they try to discredit the indispensable work of the sea rescue NGOs and to force them to withdraw from the death zone in the central Mediterranean.” 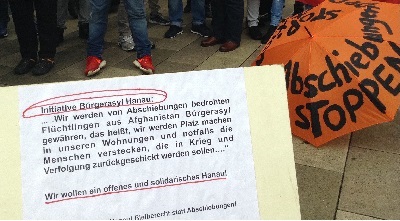 As much as the coming months will be about defending and expanding civil sea rescue at the EU’s external borders, it remains as urgent to stop the deportation offensive here at home, or at least to disrupt the working of the system as much as possible. In many places, the building and expanding of protective structures is a subject. In addition to the church asylums – in the first place against the ‘Dublin pushbacks’ – the first initiatives for a ‘civil asylum’ are now starting, to counteract charter deportations to Afghanistan with a strengthened political and practical resistance. In connection with this more and more groups are discussing concepts of the ‘Solidarity City’: no deportations, no controls (‘Don’t Ask Don’t Tell’), free access to education and social benefits (‘Access without Fear’) are three guide lines having been developed from the Sanctuary Cities in the USA and the Solidarity Cities in Canada. Considering the different circumstances oversees, much cannot be adopted here, but the experiences are valuable and incite us to probe and try to expand our local communal elbow room. A Medico Symposium on the same subject (on 8 and 9.6. in Frankfurt, see below) will offer another place for debating and networking. And all these initiatives and visions of the Solidarity City will finally also be put on the agenda of the upcoming ‘Great September Mobilisation’!

Finally – as already mentioned in the last Kompass – numerous groups and networks have made appointments for joint action days. On 2.9. they will start locally, on 16.9., one week before the German federal elections, the activities will lead to one large antiracist parade in the capital. At the latest at the German Evangelical Congress at the end of May in Berlin, where flight and migration are a central theme, the mobilisation will start with first materials; in June and July (see our calendar) there will be many further occasions to get to know the new campaign of ‘Get Together’ and to get involved. In this sense also from us: ‘We’ll come United’.

P.S. as to us: we are still urgently looking for more people to help us to quickly translate this Newsletter into English and French.