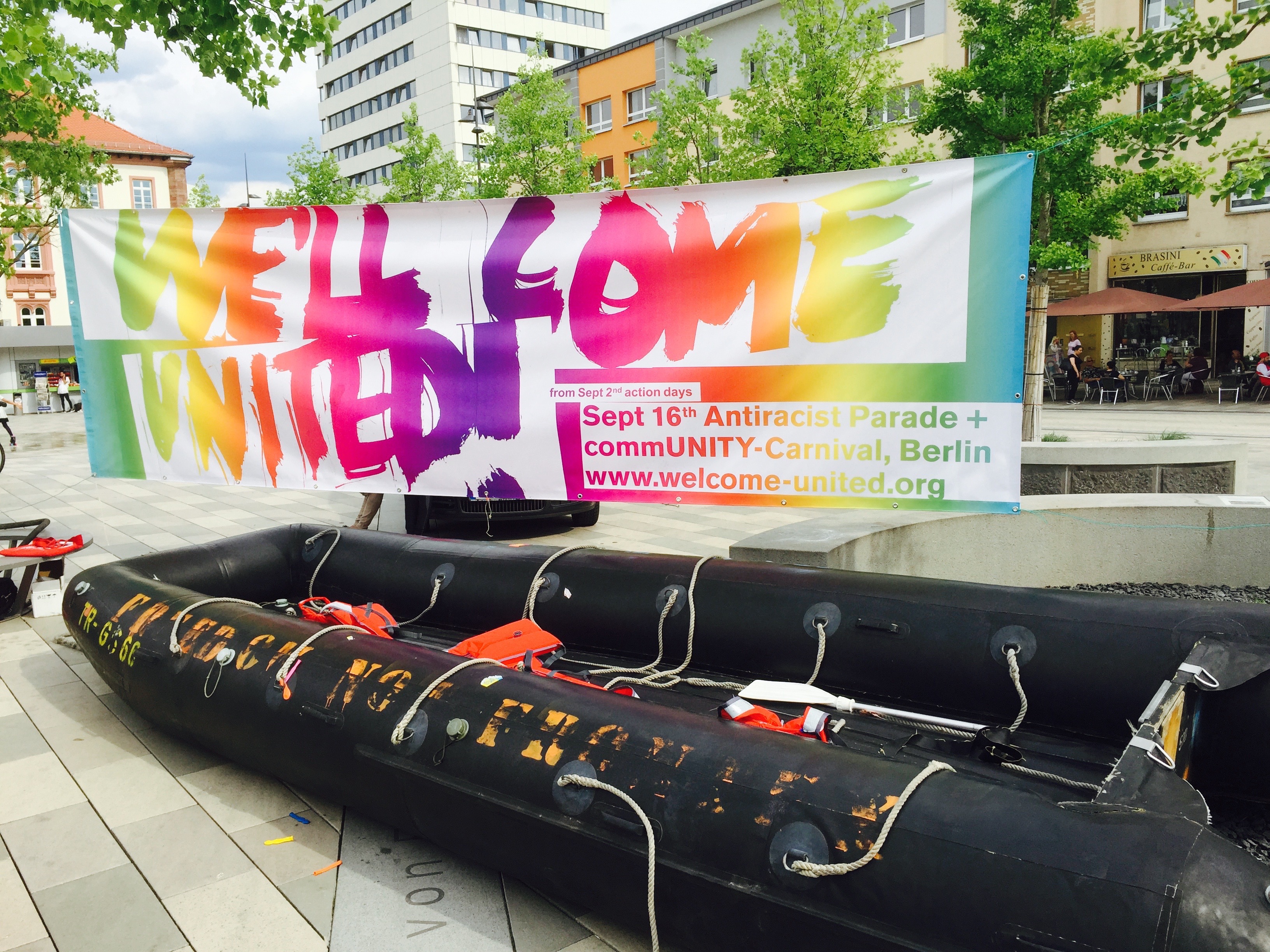 Welcome United!
A word play between the German  expressions „Wilkommen zusammen”  and „wir kommen zusammen“ has led to Welcome United/We`ll Come United, the title for a moving call-up with which the Get Together Network has started in its first flyers and activities to announce the September mobilization, see http://www.welcome-united.org/de/home/. In the next weeks the eye-catching logo will pop up at all the coming actions: in Berlin against the G20’ ‘Africa Partnership’, in Dresden at the Conference of the Ministers of the Interior of the German Federal States, in Kassel at the Documenta on the occasion of 20 years no-one is illegal, or in Hamburg against the monster parade of the G20.
The Action Days from 2.9. and the big parade in Berlin on 16.9. offer the great chance for the anti-racist movement to show itself, nationwide and united, in all its diversity and with all its daily struggles. This will give a strong signal that our stand for an open Europe, for freedom of movement and for equal rights for all, is and stays alive.  We call on everybody to take initiatives locally, to put their local struggles in this concerted context and to spread their own calls with their own demands. Order postcards and posters! Organize meetings and think about how a collective journey on 16.9. to Berlin, in busses from many cities, from many camps, together with the refugees and with the communities, can be organized.  “We are more than we think…” the call incites us and we will show our unity; especially because the racist rollback which is topical at this moment – e.g. the deterrence campaign against Afghan refugees – is totally faltering. With the devastating attack in Kabul the fairy tale of the secure zones in Afghanistan is more and more untenable, the cynicism of the Federal Minister of the Interior, Maizière, more and more evident. At the same time political pressure is increasing on all sides, to finally end the ‘charters of shame’. The school kids in Nürnberg demonstrated most impressively what practical solidarity looks like, see https://m.facebook.com/story.php?story_fbid=822762201208714&id=137689039716037
With a delay of one day Merkel and Gabriel cum suis were forced to take emergency measures. Now it is our move, to turn the provisional deportation stop in the coming weeks and months into a long-term one and not to allow any so-called ‘exceptions’. Therefore ‘We’ll Come United’ will once again be to the point directly before the federal elections in September. The dispute is a good example of how controversial the deportation policy remains. The desk culprits of  McKinsey and the Ministers of State at their green tables are daily and everywhere confronted with practical right of residence struggles, which give them with their racist bills a lot to chew on. The resistance, in particular against the ‘Dublin deportations’ remains massive, from the parties concerned themselves and also from the diverse spectrum of their supporters. It may more and more often be necessary to organize hideouts against deportations and to offensively propagate these, like in the initiative ‘Bürgerasyl’ (civil asylum). But in a political sense the ‘movement for freedom of movement and equal rights’, does not need to hide. A basis has developed that stands up to the politics of exclusion – We`ll Come United!
20 years no-one is illegal
“It was a hazardous defensive undertaking, because the point of departure was more than precarious in 1997. The massive undermining of asylum law as of 1993 still had its aftereffects, the number of new asylum applications was steadily decreasing, the deportation numbers were at a constant high. The criminalization of the illegalized as well as of potential ‘flight assistants’ was stepped up and in the media as well as in the social movements the theme of undocumented migration was rather marginal…”  These are the opening sentences of a balance sheet and evaluation text on the subject of 20 years no-one is illegal, which tries to place the developments of the years passed and up to today in the context of contemporary history, see  http://ffm-online.org/2017/06/03/20-jahre-kein-mensch-ist-illegal/#more-48670.  Compared to 1997, the current situation appears to be somewhat more optimistic, or at least much more open in the sense of spaces fought for. “We are no sprinters, we are marathon runners” – refugees in the past have used this image again and again to describe their persevering struggle, which means that no-one is illegal is 20 years young (!), and at the end of June there will be several occasions in Kassel, to discuss experiences, permanences and potentials in the field of flight and migration, see https://noii2017.wordpress.com  Or as it reads at the end of the aforementioned text: “For these developments and dynamics no-one is illegal has laid the foundation stone 20 years ago and – even though the initiative as an independent structure has dissolved into new networks in the 2000s – has given central impulses through the IntiRa movement. From the external borders to the inner cities, from the rescue at sea to the Solidarity City – at all levels permanent campaigns and day-to-day projects have developed, in and through which the simple and at the same time radical slogan is reflected and remains alive”.

The Kompass Crew
Contact: kompass-notify@antira.info
P.S. as to us: we are still urgently looking for more people to help us to quickly translate this Newsletter into English and French.